That's only dollars though.

Empire Strikez Back is on

When star wars was good

return of the jedi was good though.
Lovely Jubbly
Top

Empire was and still the best out of the franchise.

They quite simply cannot ignore the poor reception the new films got. If they make three similar films, they need shooting.
Top

So the writer of Toy Story 3 will be writing the new films then.
Top

So it is going to feature an Old Luke fighting what the new evil empire lead by the Emporer Zurg and his army of wind up robots and his side kick lotso hugging bear as his number two.

Jesus fuck a part of me just died.

I see Lawrence Kasdan has signed up to help write the new Star Wars films, ok, now I'm looking forward to them

Sounds more like it. The last ones ave been on telly recently, and I just can't believe how bad they are.


Star Wars: Episode VII’ will go back to basics according to producer and Lucasfilm boss Kathleen Kennedy.

In front of a packed crowd at the Star Wars Celebration Europe convention in Essen, Germany – where she also confirmed that composer John Williams will return - she discussed the importance to mixing CGI with practical filmmaking.

“The conversation we’re having all the time now about ‘Episode VII’ is how much CGI. We’re looking at what the early ‘Star Wars’ films did; they used real locations with special effects. So [for ‘Episode VII’] we’re going to find some very cool locations, were going to end up using every single tool in the toolbox.

Asked to elaborate by host Warwick Davis, Kennedy said she was inspired by the fan costumes at the convention.

“I was amazed yesterday and looking at what the fans are doing. Using model makers, using real droids, taking advantage of the artwork that you can touch and feel, we want to do that in combination with CG effects.”

The remarks received a rapturous reception from fans, many of whom felt that the ‘Star Wars’ prequel movies relied too heavily on green-screen trickery, and not enough on the practical ingenuity seen in the original films.

She revealed the ‘Star Wars: Episode VII’ team, including director JJ Abrams and his writers at production company Bad Robot, are currently working on new characters for the film.

“I think we have the opportunity to create amazing new characters. Story and character are all we’re talking about right now.

“I spend half my week at Lucasfilm in San Francisco, the second half with JJ and writing team at Bad Robot. The focus every day is lengthy story meetings and there’s some great stuff coming out of those discussions.”

She also said she’d discussed the tone of ‘Episode VII’ with George Lucas.

“George kept saying Episode VII must be aspirational, be fun, and have a sense of humour. And I think he’s absolutely right.”

Sounds like they are listening to the fans which is fine.

Still finding it a little hard to look forward to it though.

I suppose when the first presss shots and trailers etc, probably even when the cast is announced, it will be a bit more motivating.
Last edited by Bill Kilgore on Sun Jul 28, 2013 7:53 pm, edited 1 time in total.
Top

About two years to go, so it'll be a long wait.

And I didn't like the sound of this bit.


George kept saying Episode VII must be aspirational, be fun, and have a sense of humour

I'm not sure I like the idea of Lucas having any influence either, the mad twat. The worst thing about these films is when they tried to be funny. I was shocked watching ROTJ last week to see that they put some singing alien in it for no reason what so ever. It was really out of place, and that's down to him.
Top

About two years to go, so it'll be a long wait.

And I didn't like the sound of this bit.


George kept saying Episode VII must be aspirational, be fun, and have a sense of humour

I thought that. But then it is Disney as well. This is going to be shit isn't it.
Top 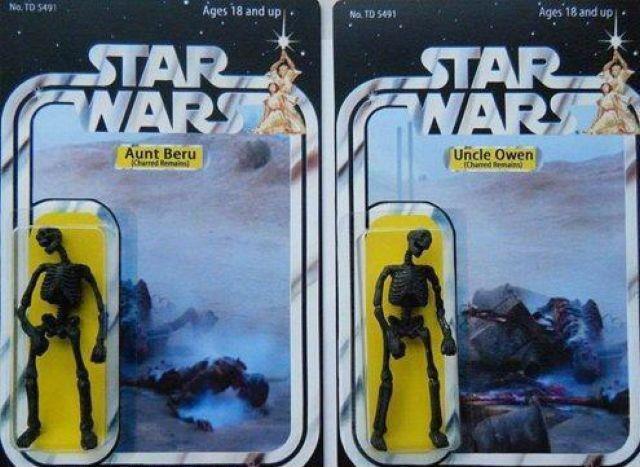